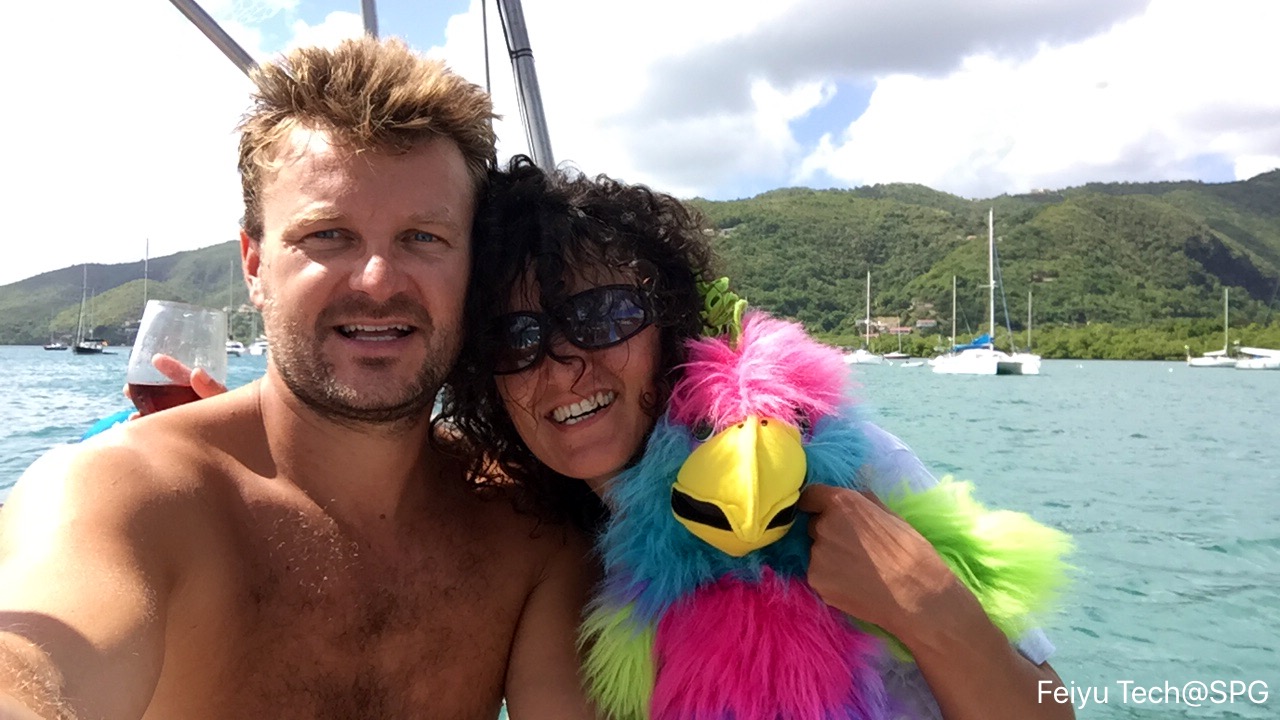 We had over a month in Marina Tazacorte, La Palma to prepare the boat, us and our families for our biggest adventure yet. Emotions? Some, but generally too busy with the doing. Our departure date was set two days in advance. The nights that followed were abundant in excitement and poor in sleep…

On leaving Marina Tazacorte we were welcomed to the ocean by a rainbow, always seen as a good omen. Surely a relaxed, fun, safe trip would appeal to anyone but there are no guarantees. With no set expectations, we enjoyed every minute of it, with the inherent ups and downs. As they say it is not about the destination, it is about the journey.

The crew’s morale was good throughout, except for Tommy, the parrot, who kept moaning about the sea state. The skipper’s reply was: “You should have read the small print, Tommy. If you want to be back to sunny shores, where you belong, you need to pay the price, mate…”

The daily routine was much more elementary than everyday life. The cooking of breakfast, lunch and dinner would almost always pose a challenge, with plates sliding off and possibly landing on the bathroom sink! We needed to hold on to things all the time and we only have four hands between the two of us (could not rely on Tommy with this one)…In between meals, getting the updated weather forecast, making our daily videos, recording progress, keeping in touch with friends and family and lots of relaxing time spent by reading, sunbathing, watching movies, etc.

It was interesting to see the unfolding and closing of the day at later times every day, shifting gradually to the Caribbean time zone.

If you add the squalls to the picture it is like being chased by mad bulls on the streets of Pamplona. Some squalls can be more vicious than the bulls. But luckily they do not last for long; if you are quick enough to furl in the sails you come out of ‘the ring’ unscratched. At night add to the picture the wind howling in the rigging and the incessant sound of waves surfing, and at times breaking into Mehalah’s hull. It always feels worse at night…

We had nights when Sorin went up on deck and back down the entire time to adjust the sails and ensure that Mehalah continues sailing when the wind had dropped and/or shifted. It can be very frustrating, tiring and debilitating when after numerous changes of sails you see no improvement…we could not let sails flap as the flapping would damage them, whilst taking a toll on the rigging; we could not put the engine on as the diesel was limited…and we felt helpless… until we had no choice than putting the engine on!

Out in the open, faced with the great greatness of the ocean, the connection between the boat and its crew reaches a new dimension. Total dependency and complicity. Like our lives became fully integrated, in complete symbiosis. If the boat is not happy – at any time of the day or night – we (well, mostly Sorin) automatically jumped out of the hard gained comfort. Tired, sleepy or just not in the mood to get out in the rain or cold (yes, it can rain or be cold at night!) we would just do it. Our lives depend on the wellbeing of the boat and vice-versa.

A female sailor friend was saying that sailing can be like the pain of giving birth married with the joy of holding your child in arms for the first time.

On the flip side, there were perfectly  harmonious moments when everything felt just right: – a calm breeze and Mehalah surfing the waves nicely towards her destination (no flapping sails!); a full rainbow dressing up the horizon; our old companions, the dolphins, who are competing with Mehalah always coming first…; the laid back whales surfing the waves in no particular rush; the sun that is caressing our lazy bodies…; and  the sky at night – every time we contemplated its immensity and richness it was as breathtaking as the first time…an imperial ball dress with incessantly unfolding veils to cover the equally breathtaking body of the ocean.

The question is: do I put up with the conditions for the extreme beauty? In our case, the answer is definitely a ‘yes’! Thank you, beloved Skipper, for all the great care taken of Mehalah and her meagre crew.

We made landfall in Martinique after three weeks and one day. We covered 4835 km. We seem to have reached the Garden of Eden, so definitely we will explore the island inland.

2 thoughts on “Atlantic crossing from La Palma to Martinique”