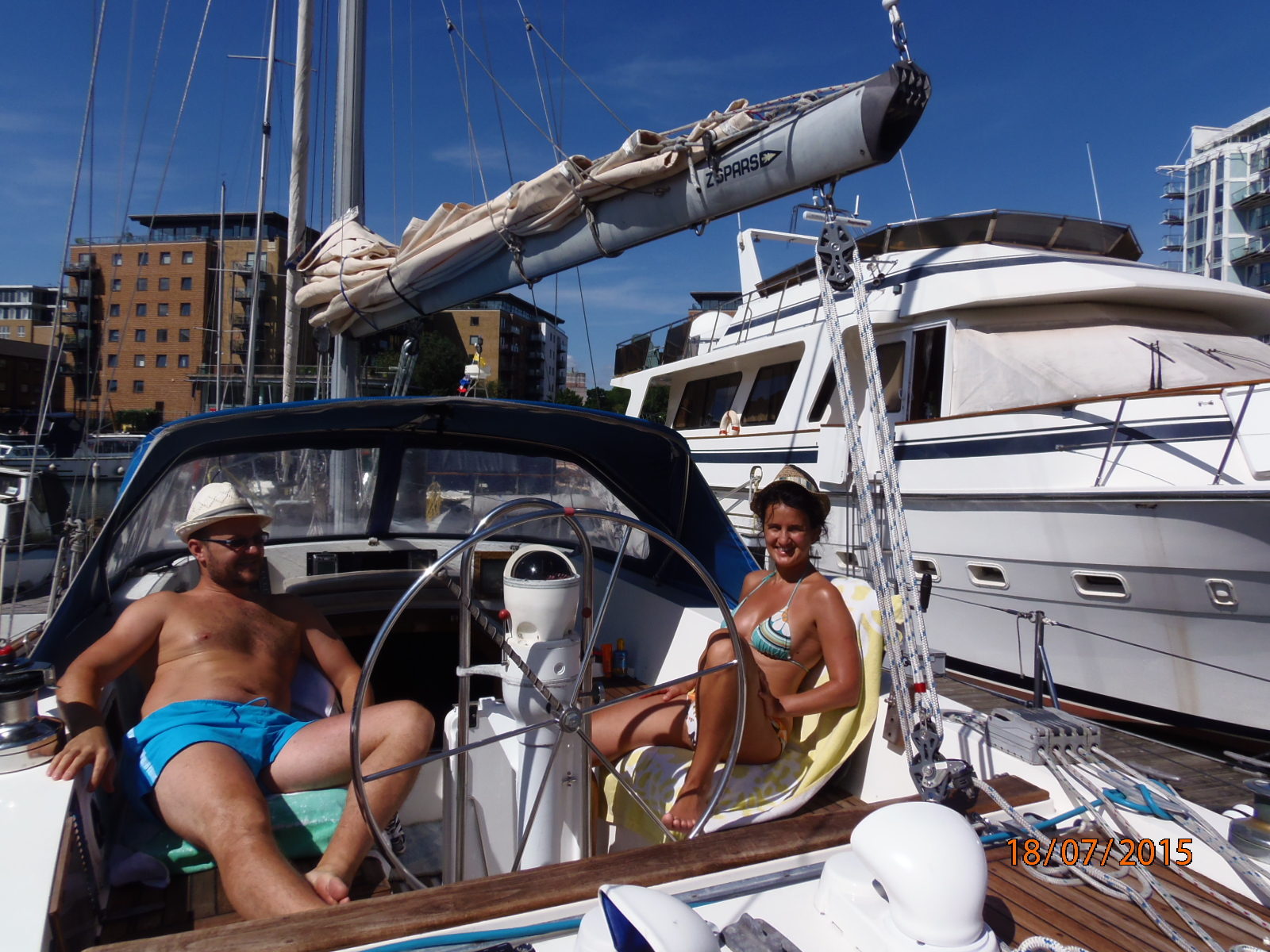 You will remember that the plan was to let out our house and start living aboard our sailboat, Mehalah. This was however delayed by an unexpected event.

In summer 2013 we were sailing back from London to Faversham with my cousin and his wife, who were visiting from Romania. We anchored overnight at Stangate Creek in the Thames Estuary. In the morning we started the engine to lift the anchor and after motoring for 10 – 15 min clunk! The engine stopped. My cousin was steering and Sorin joked: “What have you done?” My cousin in charge of steering the boat

Of course he hadn’t done anything. The engine had just died.

Sorin immediately dropped the anchor and looked into what could have happened. After spinning the prop shaft by hand, checking fuel level, pipes, oil and belts – there was no obvious reasons for an engine seizure.

We had to get underway, so the sails were hoisted. The seas were rough, but having sailed in the Thames Estuary many times, we made it to the Oare Creek entrance by late afternoon. Meanwhile Sorin made a few calls to yacht-ies from the creek. Our mooring owner came with his small fishing boat to tow us in from the creek mouth. The whole picture was hilarious. The tandem looked like an ant dragging an elephant! But we were grateful to our ‘bienfaiteur’.

Once moored up, after further investigations, it was concluded that the engine seized irreversibly. Sorin immediately started to look into ways to have a working engine on the boat again. Buying a new engine was out of the question as it cost over £10k. He called a couple of engine mechanics to check the engine out. The engine was beyond repair.

Sorin decided to lift it off the boat and have it rebuilt by a marine engineer in Rochester. Big mistake! Our marine engineer should have known that rebuilding a boat motor is not a straight forward job. The estimated time for the rebuild was around 6 months. Painfully long but we had no choice. Six months turned into seven, seven into eight and so on…until Sorin, fed up with putting pressure to no avail over the phone, went to the workshop. He found the engine in bits!

Tough!!! As I was having to deal with an immensely annoyed and pretty much desperate Sorin. That same day I brought home from work post it notes and we started a brainstorming session. Among the options was buying a functional used engine that could replace the old one. We agreed that replacing our boat motor would make most sense in the circumstances. Sorin had a target again – finding that used engine! Not an easy task given Mehalah’s age… His luck returned, as he found one pretty quickly in Hartlepool. He was now on a mission to servise it, calibrate it for Mehalah and drop it on to the boat.

It was a time taking project to which our beloved neighbour, a former and very skilled car mechanic, contributed a great deal. Our garage turned for a couple of months into a workshop. The minute Sorin was home from work you could find him in that garage! It was all worth it as in spring 2014 we could take Mehalah out at sea again! Happy days!

We now knew that once the summer is over we have to get on with our plan of living aboard our sailboat. But we needed to find a suitable mooring first. We looked at options in London and around London. We are no longer city animals. We very much prefer the quiet and picturesque county side. But since we were both working in London and the commute from Chatham or Gillingham would have been pretty expensive and time consuming, we decided to move to Limehouse, where Sorin had obtained a mooring by befriending one of the marina staff.

Overcoming the daunting thoughts of what it would mean leaving our belongings behind and letting the house out, in November 2014, we started our liveaboard-ers life! A daunting but exciting new beginning that we wholeheartedly embraced.

We made some good friends in the marina. We were within a walking distance from work. But most of all, we now had all the time to look after our lovely Oyster Yacht. We no longer had to rush between London and Faversham for a weekend sailing or just to be on the boat! We were there all the time to make improvements, sunbathe and take her out sailing at the weekend. We spent many weekends, picking up a buoy at Thurrock Sailing Club on the Thames. On the rare occasion when the tide and wind were right we could even sail to Stangate Creek and back over the weekend! We have now been living aboard our sailboat at Limehouse Basin for more than three years and gearing up for our next and most exciting adventure – sailing around the world! We will leave everything behind and go ‘outwiththewind’. We would be delighted if you joined us in the journey! We would love to share our sailing adventures with you, the delights and the challenges on the way.

If at least one of you will be inspired to realise their dreams, then the time spent writing was worthwhile!