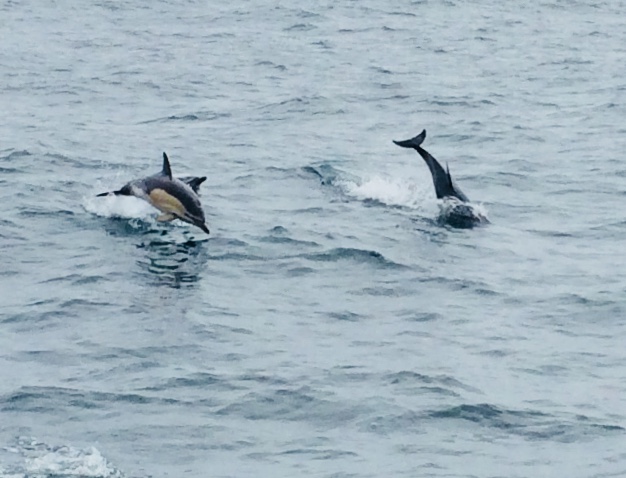 When we published last the intention, weather dependent, was to leave Falmouth at the same time as the Golden Globe contestants. It did not happen. The odds had been against it throughout.

Firstly, it blew a hooley the night before, so for most of it, we were awake. Although quite sluggish in the morning, we were not put off by the lack of sleep. We knew that with the excitement the adrenaline would kick in; and it did! However, by no means we were able to download the weather on the sat phone that morning – first time it happened. This mustn’t have been a good omen.

And once we came out of the marina with the contestants, the excitement kicked in indeed. All the boats (contestants and onlookers alike) were hovering in the bay waiting for the start of the fun race between Falmouth and Les Sables.

At that point, we had given up on our attempts to get the weather forecast. But we were finding it hard to resist the temptation of heading off.

Whilst hovering and admiring the boats, looking up Sorin noticed something and he mutters between teeth: “This is not good.” I was steering and had no idea what had happened. But I quickly figured out that the main halyard had wrapped around our radar reflector. Sorin’s attempts to untangle it from the deck were unsuccessful.

It was then clear, that forecast or not, we will not set off with the racers. Half frustrated, half relieved we dropped anchor in the bay and I went up the mast to release the halyard. Lesson learned: always fully secure the halyard (and any other lines on deck).

After having lunch, we finally were able to download the weather. The outlook was favourable only for a very limited window. A low front (with strong winds) was reaching the UK’ south west coast from Ireland in the coming 24 hours and another low was approaching the north coast of Spain from the Atlantic at around the time we were meant to get there (in approximately 4 days). My first reaction was: “ oh well, we will have to wait for another weather window”; however this was risky, as we could have waited for a long time for the ideal weather…; and by then, we were both having ‘itchy feet’.

It was already 7 pm. After checking the tides, Sorin said: “Let’s leave now.” I was taken by surprise, and my initial reaction was to resist; but it did not take him long to persuade me. After notifying the Falmouth coastguard of our intended departure and estimated arrival time, we set off.

It was a beautiful evening, and as we were leaving behind the bay the waves were gaining momentum. We had experienced bigger waves in the channel, but they were more like repeated slaps; these were big (both in length and height) but they felt more like gentle caresses as they were further apart. As we were advancing, the sea state gradually changed to rough and confused.

After having dinner I laid down on deck, whilst Sorin was on watch. Next thing I knew was that I stood up feeling very sick. I threw up. With all the excitement we had forgotten to take the sea sickness pills the night before. And for the following 24 hours I paid for it. For those of you who have not experienced it, sea sickness is a pretty debilitating state. After the onset, it can take a long time to regain normality. It took me around 24 hours to come around. During this time, and for the rest of the crossing, I did not go down below. Conditions are much worse than when on deck.

Sorin took charge of everything from cooking to navigating for the whole passage. This meant he had very little to no sleep.

So far the passage may seem like a bit of a pain!? But on the flip side, we had  favourable winds, so we were able to sail for almost the entire passage. We also had infinite moments of joy, repeatedly being accompanied by bottlenose dauphins, putting up a delightful show – we were seeing them coming from afar in acrobatic jumps; once they were reaching us, they were going under Mehalah on one side and coming up on the other side, they were rushing before her, they were jumping, flipping their tails in the air, in groups or individually. It was breathtaking; and whilst enjoying their show, I made a vow that I will never ever go to any place where living creatures are kept in captivity for people’s entertainment, no matter how tempting! One of the days, we passed close to a whale (fin whale or sperm whale). Sorin heard a very loud puff. When he turned around, to his amazement he noticed the huge creature, with her baby. They were only approximately 30 metres away. As happy as we were to see them,  as relieved we felt when they stayed behind and we gained distance. Due to their size and weight, whales represent a hazard to sailing boats.

On Sunday night we made it to the north coast of Spain. We dropped anchor in the closest river (Sor) at around 2:30am. We marked our success with a drink, and after warm showers, we regained the usual space in our bed. What a delight!

LWe woke up the next day around lunchtime to beautiful green surroundings. After coffee, we set off west to the next river – Cedeira – recommend by a friend for the beauty of the surroundings and the safe anchorage. We spent there the entire week. The area was too beautiful to rush off – green sunny shores, empty white beaches, pine and varied flowers scents, friendly people, and very good food and wine. It felt like paradise. We now arrived in A Coruna with a list of things to accomplish – laundry, cleaning, checking the rigging, catching up on emails, etc. Once ready, we will be progressing south along the Atlantic coast.

On a special note, it would be a pity to close the UK related part of our story without mentioning the fantastic sent off from Limehouse Marina on 5 May 2018. The moment we slipped the lines, horns started to blow, people came out on the pontoons to wave us goodbye and a crowd of well wishers gathered at the marina lock. Some handed us little goodbye gifts. The marina staff on duty that sunny afternoon came close to the boat, and like a coach tapped Sorin’s shoulder after telling him a few words of encouragement. It was a touching experience, especially that we did see it coming. It meant a great deal to us.

9 thoughts on “The Bay of Biscay crossing”