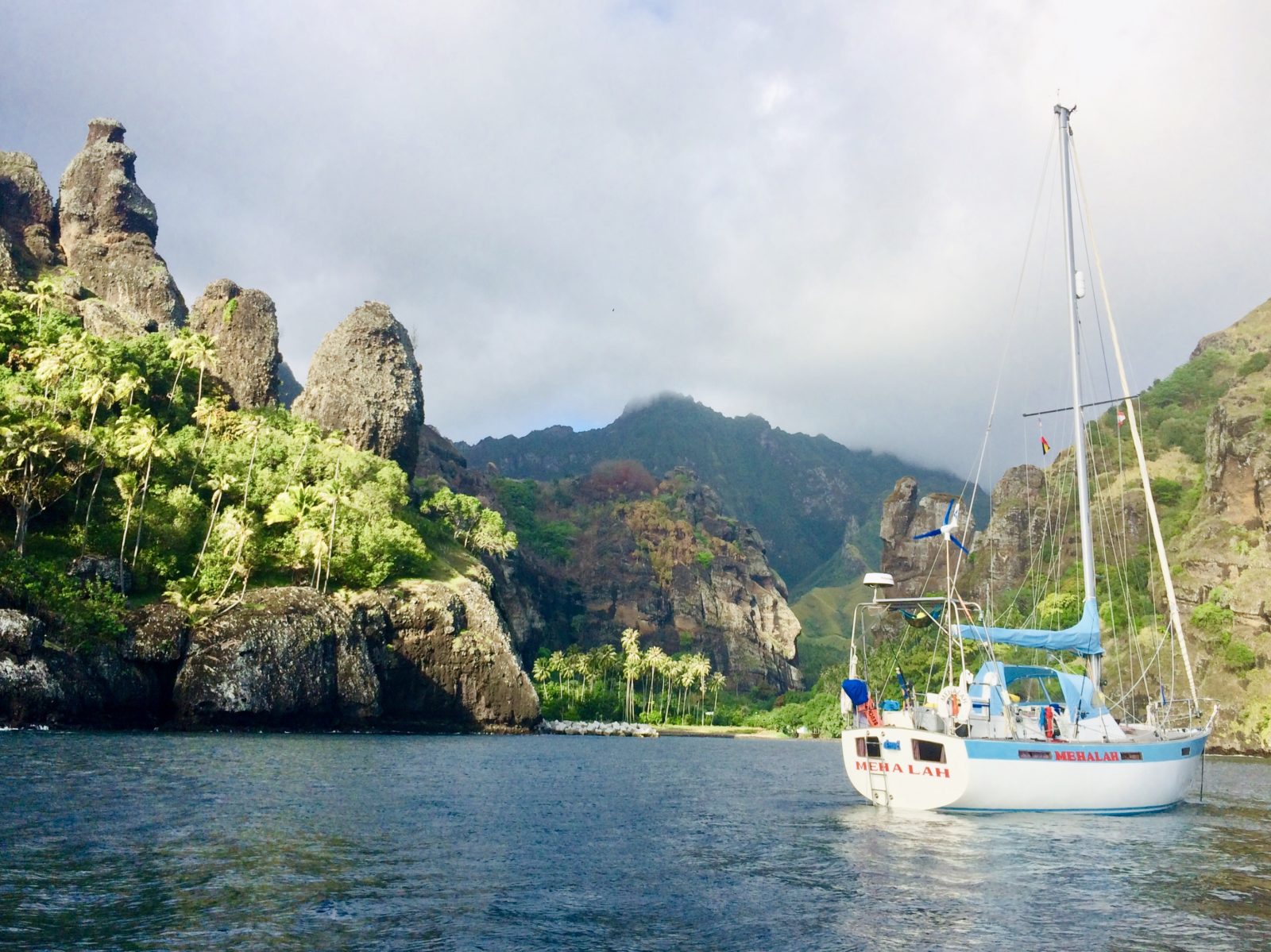 The Marquises, a land of fascinating traditions and dramatic landscapes, was an experience like no other.

Towering over the ocean, the Marquises raise their stunning peaks to conceal archeological treasures in deep lush valleys in the open air. Waterfalls hurl down the towering picks forming beautiful lagoons and rushing cool rivers. Walking along these valleys adorned with a thousand fragrant plants among coconut, pomelo, lime and mango trees, accompanied by the water’s chant rushing over the stones, and sheltered right and left by the green precipices is a fairy tale experience.

Believed to be of Australasian origins, the inhabitants of the most remote Archipelago from Tahiti are strong believers in the fact that they were the first human beings to inhabit Planet Earth. They, therefore, named the Archipelago “The Land of Men” (Te Henua Enata in Marquesan).

The islands had a highly developed civilisation by the time the first European set foot here in the late fifteen hundreds. The Spanish navigator, Alvaro de Mendana was the first to arrive. He named the Archipelago ‘Las Islas de las Marquesa’ after the Marchioness of Mendoza, who’s husband had sponsored his expedition.

Numerous ruins of ancient villages are still found in the lush valleys, testimony of the thriving communities that once lived on the islands. These communities were decimated by various diseases brought by the early visitors and by the forceful abduction of men to work on plantations. Currently scarcely populated, only six of the twelve islands are inhabited.

The distinctive marquesan language accompanies the rhythmic Haka dances with beautiful songs. Emotionally charged, these songs and dances combine the feminine grace with the male strength to tell fascination stories (the warrior song, the bird song, etc.). Whilst on the islands we witnessed numerous such performances. The islanders take part in a great number. Whilst performing (singing and dancing) it seemed like their spirits are transported by a supernatural energy that takes them to a higher dimension of existence…

The marquesan story is also told through the wealth of decorative arts specific to these lands: tattoos,  sculptures, tapa, petroglyphs. The tattoos have an important role in the traditional Polynesian culture. As a local of a village currently inhabited by only two families explained, boys start telling their life story through the tattoos when they are sixteen years old, adding to them as they grow older. The tattoos represent major life events, rites of passage, social status, deeds of heroism, hunting and fishing prowess, family identity and religious power.

In the Polynesian culture there seem to be a fully accepted and integrated third sex, Rae-Rae. These are born male that live more comfortably in the skin of a female and are fully accepted in the society as such. They marry and have children. Very accommodating and the perfect hosts, they tend to be employed in the Hospitality Industry in luxurious resorts in Tahiti and Bora Bora.

Despite their savage roots, the inhabitants of the islands are authentic, friendly and hospitable. It is very hard to imagine that the last cases of cannibalism were recorded in this Archipelago. The word amongst cruisers goes that only eight years ago, a local of Daniel’s Bay was arrested and charged with killing a German cruiser. Some of his bodily parts were never found…Are they perhaps “irreclaimable cannibals” as Melville etiquettes the natives in his book ‘Typee’?

Our time on the islands was spent recovering, exploring, partying and looking after Mehalah.

We visited five islands and we really loved Nuku Hiva – the place of our landfall and the setting of Melville’s book ‘Typee’. We celebrated our 1 year cruisingversary at Pearl Lodge accompanied by the powerful Haka rhythms and dances. These beautifully combine the opposing male and female energies to tell symbolistic stories of war and peace.

The manhood is not only artistically expressed. On numerous occasions we crossed men on horses equipped with hunting gear and some with fully tattoo-ed faces/bodies. These encounters would always create a strong impression on us. The usual targets that roam the rugged lands in great abundance are boars, goats, wild horses and even jungle-fowls.

With a very agreeable nature children seem to be developing an untamed half amphibian nature taking to the ocean waves with a remarkable swiftness. In Ua Pou we witnessed the local children being swiped by huge ocean waves on a concrete ramp and back incessantly. They would seldom pause to dig into one of the round shaped ocean creatures that grows on the bottom and is covered in pins – sea urchins. How they would do this without getting hurt is beyond me! Noticing me gazing in awe, a girl held the ‘thing’ out to me in order to try. I dug my finger in, to meet with a gelatinous thing that I put on my tongue with repulsion.

We visited archeological sites (Tohuas) set on plateaus among luxuriant vegetation and majestic ancient trees. We saw for the first time the omnipresent tikis – stone statues with religious meaning. We sailed to scenic bays set in verdant surroundings and walked by rushing brooks alongside dramatic precipices adorned with a thousand fragrant plants to reach boisterous waterfalls and swim in the beautiful lagoons. We enjoyed the locals hospitality and made new friends among locals and cruisers.

We moved onto Ua Pou, a really wild place, with its dramatic background formed by huge inverted stalactites like rock formations looming out of the clouds. More waterfalls, wild locals and a German chocolatier inhabiting his own bit of paradise on top of a mountain among cafe, cocoa and fantastically scented fruit trees by a swimming pool.

After a 24 hours unpleasant passage against the wind we reached Tahuata for crystal clear waters populated by colourful fish, huge manta rays and a pbig dolphin pod in training duty of the playful baby dolphins. Each morning they were doing their practice in the anchorage before adventuring out of the bay for a while and returning on satisfactorily completion of the practice.

The stop in Tahuata was followed by a short sail to Atouna in Hiva Oa for more walks to ravishingly places. We walked up a steep hill leaving the village behind to reach the graveyard where both the Belgian singer Jaques Brel and the French painter Gauguin are buried in green surroundings overlooking the bay.

We left the best for last. As I am writing these lines we are in what is rightfully quoted as one of the most beautiful anchorages in the world – the Virgins’ Bay or Hanavave in Marquesan. A regular target for the National Geographic’s reporters, this gorgeous bay is our last stop ahead of the five day passage to Tuamotus (The Dangerous Archipelago in Polynesian). We are anchored of a tiny beach hugged by an agglomeration of circular precipices covered in the most beautiful foliage that is inhabited by chirping birds and grazing wild goats, and in a walking distance to Hanavave village.

We enjoyed again the incredible kindness of the local people. We assisted to the process of making tapa (a handmade painting of local motives on a sheet obtained from tree roots bark tapped until it is flat and left to dry) – a Marquesan custom that survived only on this island.

We were invited to join the Saturday football match. Initially we declined as football would be the last thing we want to see on this trip. On reflection, we realised that this could be interesting. And it was.

I presumed that the teams representing the only two villages on the island (each currently inhabited by about 600 people) would take the fierce historical rivalry on the football pitch. But no. We never assisted to such a fair play in any team sport, less so when it comes to football. The referee must have stopped the match for an obstruction less than three times. Each team scored four times. Another unusual aspect was that when either team was scoring everyone would rejoice equally…I was perplexed! One of the locals explained that they are here for the game and it is not important who is scoring…

Children were jumping in the neighbouring river and the ocean to recuperate the gone astray balls. A hungry dog was hovering on the pitch for leftovers from spectators. The neighbouring onlookers were offering us dried fish and dried bananas. Another welcome distraction were the big eels (with a head resembling a pit-bull) that were undulating in the river behind us.

We further immersed in the culture by joining the locals for the Sunday church service. The Marquesans were the last of the Pacific Islands to be converted to Christianity. Many of the early missionaries have found their dreadful end here.

The service was a nice experience. It lasted about two hours and it consisted in a mix of singing and preaching. More singing than preaching! The big drums that are such an usual occurrence around these islands were accompanied by the guitar. The proceedings were developing calmly in a silence that was only broken by the occasional murmurs of children and by the sudden bursting into joyous singing.

Everyone was beautifully dressed in white or brightly coloured dresses or shirts. The long dark hair of the fair sex was adorned in pretty flower arrangements. Flowers in contrast with their perfect umber complexion, were also replacing the earrings. Everyone’s beautiful attire was compensating for the simplicity of the church. The preachers were wearing white robes. The white walls were embellished with only a couple of simple icons and the wooden pulpit was the simplest I’ve seen. The social event ended with people congratulating and hugging each other.

We walked past the remains of an ancient village in the jungle to go to yet another waterfall and dipped in the refreshing natural swimming pool at its base.

Another day, we left the waterfall behind to climb even higher – right on the top of the highest precipices in the bay, where the Christians raised a white cross.

The extraordinary thing about our walks on these islands is that we never met other people on our way. This made us feel like the charm was reserved all for us…Every time would return with our rucksacks full of fruit – papaya, pomelo, lime, anise, banana, coconut.

On a sunny day (because thankfully not all days are sunny on the bay), we thought it would be nice to visit the only other village on the island, Omoa. Since it is less than one hour away by dinghy we chose this form of locomotion instead of a four hour walk up and down the high precipices.

In Omoa we have finally seen the eluding petroglyphs which we did not manage to see on the other islands. We also spent the afternoon with Egnes, who we met on the street and invited us for coffee at hers. Half German and half Spanish, Egnes was born on the island. We chatted about everything and anything, and after a walk to the petroglyphs we stopped on the way back at her house and were absolutely loaded with fruit. Thank you, Egnes! In the process of picking up the fruit I was hovering around trying to film, when I just managed to dodge a falling banana tree…

Compelled by the beauty of the South Pacific islands and by the seagoing nomadic lifestyle, we figured that we do not have a good enough reason to rush back to Europe. Although money are a point to consider we are both committed to let it influence least our life choices.

8 thoughts on “The Marquises, an unexpected turning point in our voyage”