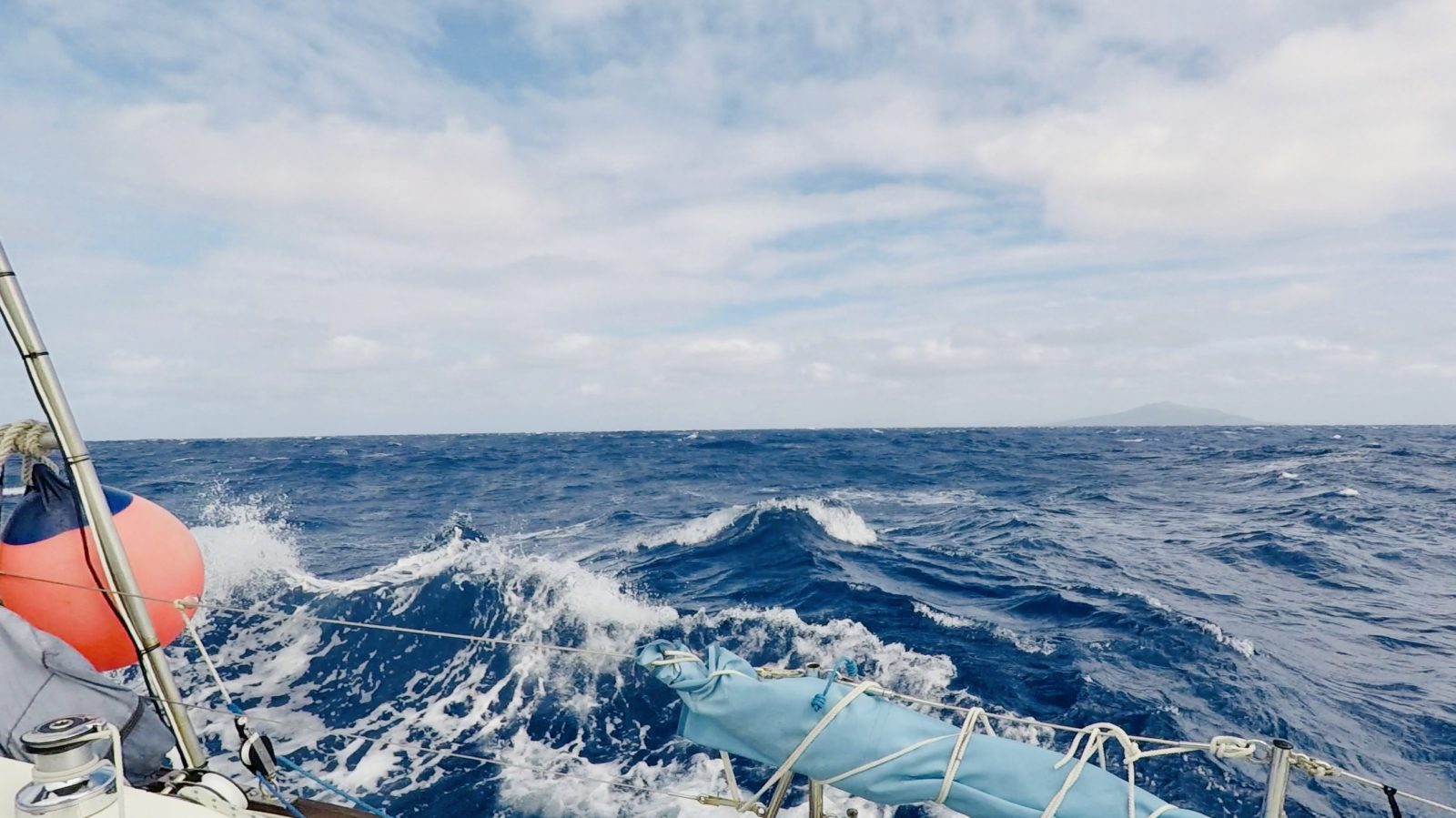 The passage from Tonga to Fiji was not the easiest.

As we came out of the maze of islands of Tonga Vava’u we were waved by the whales’ tails sprouting out of the water. The giant aquatic creatures were being chased by a few tourists boats. We were happy not to have fallen into the temptation of going on one of these overpriced whales chasing excursions.

As we were leaving the land maze behind, our natural excitement was slashed by the sea state. Strong winds with big waves. We spent the following two days mostly on our backs, until we reached the Lau Islands Group (the easternmost island group of Fiji, bordering Polynesia and Melanesia).

Being close to land, we needed to adopt a more prudent approach. This is a notoriously tricky area with reefs circling very low islands, littered by numerous wrecks. We, therefore, shook ourselves together to pay closer attention at all times to the surroundings. This proved to be providential.

During one of my nocturnal watches the AIS (Automatic Identification System) went off. This meant that a vessel was in our vicinity. On closer inspection, I was surprised to see that we were head to head with a fishing boat. We were on a collision course. Hmmm… the captain needed to be woken up.

Sorin’s repeated attempts to call the fishing vessel on the VHF were unsuccessful. We put all possible lights on and kept calling. Now, the rule goes that a motoring vessel gives priority to a sailing boat. But, it seemed that no one was on watch on the fishing boat. We were getting ready to furl the sails in and put the engine on to take avoiding action, when the fishing boat finally mumbled something on the radio. We were less than 200m away. It then changed course.

Sorin tried to find out on the VHF radio whether the fishing boat was trailing fishing nets. These can extend for many hundreds of meters, and could be a hazard for us going behind the fishing boat. To no avail. All he could here on the VHF, was “roger, roger”. So, all that was left for us to do was hope and pray.

Inspecting with the torch around the boat Sorin noticed a patch of light brown floating matter. In the dark we were unsure of its nature. In the day light, this turned out to be small volcanic floating pumice stones from the recent volcanic eruption in Vava’u, Tonga.

We made landfall in Suva, the capital of Fiji, on a Friday just in time for the last check in. The bay of Suva is littered with sunken fishing boats, barges and other submerged obstacles from the recent cyclones, so not the prettiest setting!

When we adventured on land we were more than happy to see that we returned to paradise. A cheap paradise too! The huge produce market in Suva was a sensory delight. We were pleased to replenish our long depleted vegetable and fruit stocks.

We were welcome everywhere with a smile and ‘Bula’. This is the universal greeting in Fiji. It is a way to welcome, say hello, good day or cheers. The population is made up of indigenous Fijians and a melting-pot of different cultures, mainly Indians, Europeans and Chinese. Having been an English colony, the English language is the unifying factor.

We took advantage of our stay in Suva to learn about Fiji (formed of 333 islands organised in six island groups) by visiting the Fiji Museum. Located within Thurston Gardens, the Fiji Museum is the oldest museum in the South Pacific. Among old photographs and numerous cultural objects, there was also a piece of rudder from the infamous ‘HMS Bounty’.

We marked the crossing of the hungry 180 meridian that made a day in the calendar just vanish (halfway through our circumnavigation) by treating ourselves with a delicious lunch at the Grand Pacific Hotel. This establishment has been an icon of the South Pacific for over a century and welcomed a pantheon of notable guests and historical figures, including her Majesty Queen Elizabeth II.

After the usual socialising with fellow sailors and locals, we cruised the west coast of Viti Levu, stopping for the night in the most peaceful anchorages.

After about five days cruising, we reached Vuda Marina where we currently are.