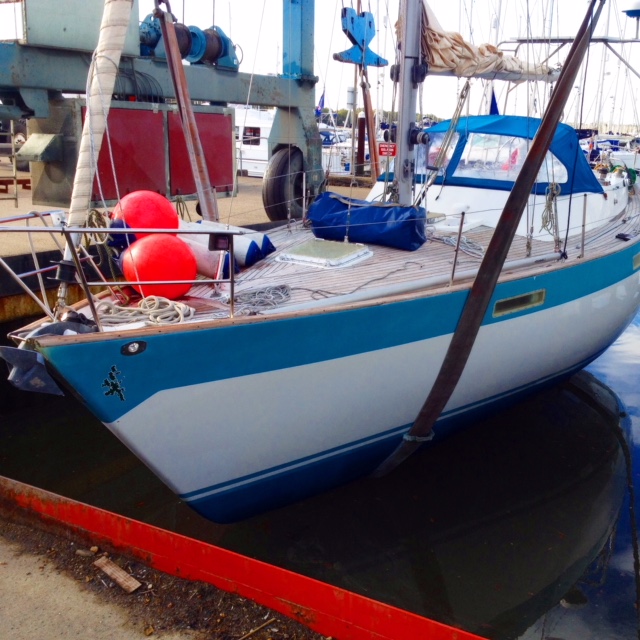 Once Mehalah was lowered in the water and crane straps removed, Sorin turned the key in the ignition and to everyone’s surprise – nothing but a click! He tried again. And again. Still nothing. Keeping his unmatched calm, Sorin sent his mate down below to check on the engine whilst he was unsuccessfully attempting to start it from the cockpit. Seconds later, he hears desperate shouts to stop! The corroded engine cooling system had turned into a water fountain, splashing everywhere. All attempts to start the engine had to stop. Mehalah was manoeuvred by lines to the nearby fuel pontoon, where the engine issue could be investigated further.

Sorin quickly realised that there wasn’t an easy fix. He was to learn never to buy a boat without a sea trial!

Mehalah had been on the dry for at least 2 years. Expecting her to be seaworthy straight away was ambitious to say the least! Only days later, after many visits to various chandlers and hose manufacturers, cuts and bruises and oil all over the place, a visit from an ex-Perkins engineer and an ever increasing mooring bill, they managed to get ‘the old donkey’ going. They were now ready to sail away!

However, the weather forecast for the coming week was not looking great. Wind strength Beaufort 6 to 8 (near gale to gale force) in the English Channel! But, Sorin was fed up with being delayed and very keen to get underway. Mehalah left Swanwich on a Wednesday afternoon in October 2012 with no working instruments – depth sounder, wind speed meter or autopilot. The intention was to sail overnight to Dover.

Despite the latest Met Office forecast on the VHF (Very High Frequency) radio, the wind’s strength kept increasing and the seas were becoming rougher and rougher. And whilst Sorin was trying to furl in the genoa to slow Mehalah down, a strong bang noise was heard from the bow. The furling line had snapped off and the entire genoa came out flying. Since Sorin was alone on deck (his only crew was sea sick down below), he cried for help. In his long johns, his mate came out and immediately went over the side puking. He eventually came around and was he was luckely fit to steer. Sorin had no choice but to clip on and walk to the bow to furl in the genoa by hand. In rough seas with the night falling…

Like unleashed beasts the foresail lines were flying and flapping all over, making a horrifying noise. The adrenaline kicked in and Sorin had to use brute force to bring the sail in and furl it all up by hand, whilst trying hard to remain feet on deck. He eventually managed to tame the roaring beasts. Victor, he returned to the cockpit. Just to feel something warm going down his neck. In one of the fighting rounds with the foresail one line must have struck his ear…

With a faulty genoa furling system and the night unfolding over rough seas, sailing to Dover was no longer an option. They needed to take cover in a closer harbour, which was Brighton. However, when contacting the Harbour Master on the VHF radio, they were advised against entering the Brighton Marina. At low water the waves were too big and crashing over the marina breakwater. They could have run aground in big seas! The alternative was Newhaven Marina that had a wider and deeper entrance. They managed despite a challenging entry. The yacht was surfing down high waves, in the dark, and it was pouring down with rain! They moored Mehalah at last, to find themselves sleeping like logs within minutes.

The next morning they fixed the genoa furling system and set off to Dover in better weather conditions. They celebrated Sorin’s crew birthday underway and they arrived in Dover safe and sound.

A glimpse of the sail from Newhaven to Dover

Then, navigating from Dover to Faversham, around the sandbanks in the Thames Estuary with no depth sounder was an interesting experience! They had to use a lead line (line with a weight at one end) for the first time to measure the depth to ensure they slalom successfully around the sand banks. With God’s grace, they managed to not run aground. They arrived in Oare Creek, Faversham on Friday afternoon. Knackered but happy – Mehalah was home at last!